Did you know that the average restaurant in Calgary is required to provide 571% more parking than an equivalent restaurant in Toronto? 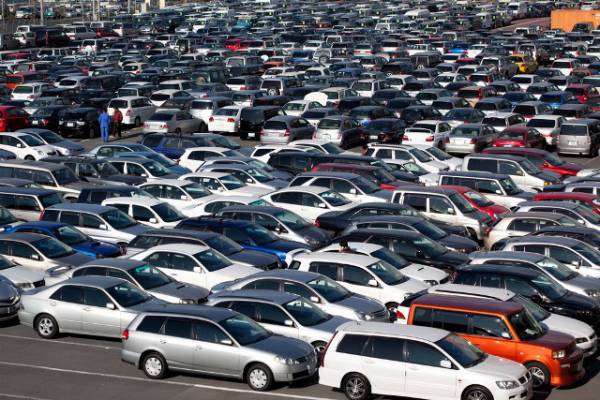 This post is adapted (stolen?) from a series of blog posts I saw called graphing parking. The purpose is best summed up with this opening line: "My intention is to demonstrate the prevalence, scale, and inconsistency of parking requirements across the United States for various land uses". I decided to do the exact same thing but using data from Canada instead of the United States. I'm also not as good with graphic design so the illustrations are somewhat uglier....my apologies.

My hope was that there would be a little more consistency and thought put into how much parking cities in Canada require for different property types but I strongly suspected that things would be no better. I was sadly proven to be correct. A 100,000 square foot office building might be required to provide as little as 133 parking spaces (Winnipeg) or as many as 325 spaces (Edmonton).

Here is a graph that shows the minimum number of parking spaces required for a 100,000 square foot office building: 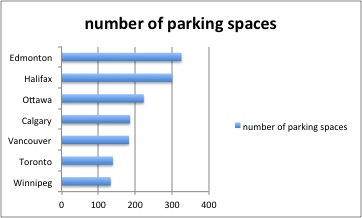 A very good question at this point is "So what?" The answer is that when developers are required to build more parking than is really required, it means that everyone (not just drivers) need to help pay for it. Parking isn't cheap. Looking at Edmonton, if we make some simple assumptions we can assume that those 325 parking spaces are taking up 105,560 square feet...more space than the office building itself!!! Assuming a surface lot, that's a lot of land. If it's underground parking, that's a whole lot of expensive excavation.

If we look at restaurants, we see the greatest variation between cities: 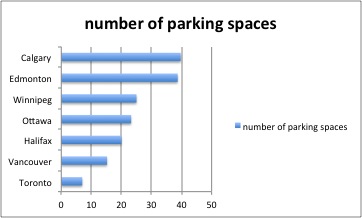 In this case we're assuming a 2500 square foot restaurant and in the case of Calgary and Edmonton I've assumed that the "public space" for a restaurant is 60% of the total (to remain consistent with the numbers used in the post I'm adapting from). In this case Toronto requires 7 spaces and Winnipeg requires 25 even though these cities were almost identical when it came to office buildings. Do people in Winnipeg drive to restaurants but walk to offices? Do Torontonians drive to their office but cycle en masse to restaurants? It seems rather unlikely but based on these by-laws you would think that city planners believe this.

Another surprise I came across is that some cities change the rules as a building grows. In Edmonton, an office building will need to supply more parking spaces per square foot for a large building than for a smaller building. In Toronto, the same thing applies to restaurants. Do large buildings discourage public transit use in some mysterious way? Do small buildings naturally attract more cyclists?

When it comes to residential parking spaces we finally see a little more conformity: 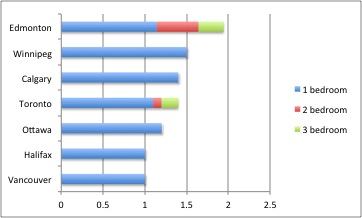 So that's the current (confusing) state of minimum parking requirements in Canada. It looks like we are stuck with a bunch of rules that have been thrown together somewhat haphazardly and these rules are helping to shape what our cities look like.

Be sure to read the original version of this for more thoughts and insights!


Montreal and Québec were not included because of difficulty finding the right data (due to a combination of municipal by-laws using complicated language and my poor French).
Posted by Unknown at 9:04 PM